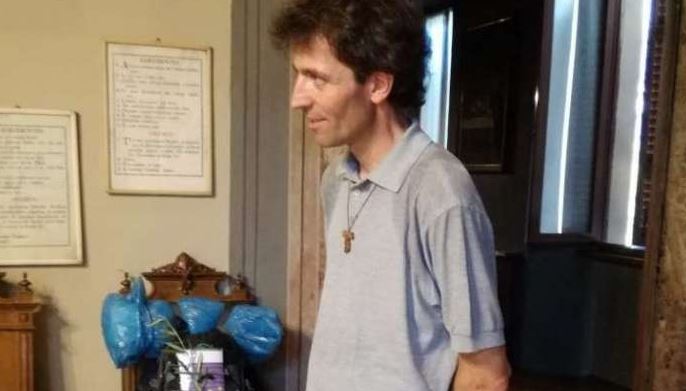 The president of Italy conferred the highest honor for civil valor Wednesday upon Fr. Roberto Malgesini, a priest who was stabbed to death near Lake Como last month.
Fr. Malgesini was a 51-year-old priest known for his care for the homeless and migrants in the northern Italian Diocese of Como. He was killed Sept. 15 near his parish, St. Rocco’s Church. His attacker was reported to be one of the migrants he helped.

“With generous and tireless self-denial he always worked hard, as an authentic interpreter of the values of human solidarity, in caring for the least and their fragility, offering loving welcome and constant support,” President Sergio Mattarella said Oct. 7 as he signed the decree.
Malgesini was posthumously awarded the Gold Medal for Civil Valor along with Willy Monteiro Duarte, an Italian whose parents are from the African island nation of Cape Verde, who was beaten to death in a small town outside of Rome on Sept. 6 after reportedly running into a fight to protect a friend.
READ ALSO: PRIEST STABBED TO DEATH IN ITALY
The president said that both men’s deaths provided “a shining example” of service “pushed to the point of extreme sacrifice.”
The day following Malgesini’s death, Pope Francis said: “I praise God for the witness, that is, for the martyrdom, of this witness of charity towards the poorest.”
The pope noted that the Italian priest had been killed “by a person in need whom he himself helped, a person with a mental illness.”

Papal almoner Cardinal Konrad Krajewski represented the pope at Malgesini’s funeral Sept. 19.
Vatican News reported that Krajewski told Bishop Oscar Cantoni of Como: “I am sure that there are many priests and lay faithful who want to pick up Fr. Roberto’s evangelical work because this path is the true Gospel in action. If by any chance no one comes forward, I will come to you.”
A 53-year-old man from Tunisia, who suffers from mental illness, initially admitted to the stabbing of Malgesini and turned himself in to police shortly afterward. The man had been known by Malgesini, who had let him sleep in a room for the homeless run by the parish. He later reportedly retracted his confession.
In the wake of Malgesini’s death, Pope Francis asked people to pray for “all the priests, sisters, lay people who work with people in need and rejected by society.”