Authorities in Belarus have authorized police to use lethal force 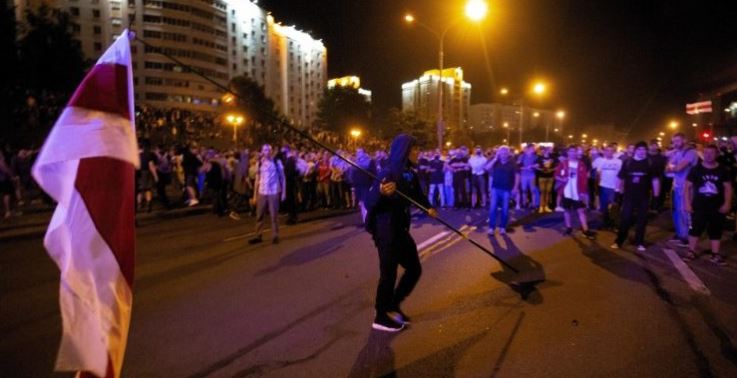 Authorities in Belarus have authorized police to use lethal force if necessary against anti-government protesters, prompting more European Union sanctions. The move comes after officials confirmed that at least 713 people were detained during mass protests against the reelection of the country's longtime leader Alexander Lukashenko in a disputed vote.
Despite massive detentions and masked men beating people and dragging them into police vans, Belarus's anti-government protests continue. Even the elderly are taking to the streets in several Belarusian cities, including here in Minsk.
They demand the resignation of President Alexander Lukashenko, who they say has ruled the former Soviet republic with an iron fist for 26 years.Demonstrators do not believe he won the August 9th presidential election with 80 percent the vote.
But the authorities are fighting back. Police even fired stun grenades and teargas during an unauthorized rally in the capital, Minsk. Footage has emerged of police vehicles unleashing a powerful orange liquid from a cannon into crowds.
And authorities have now authorized security forces to use lethal force in response to what they view as increasingly radicalized, violent anti-Lukashenko groups.
The use of live firearms would mark a significant escalation in the two-month standoff between Lukashenko and protesters.Eu sanctions
Responding to the crackdown, European Union foreign ministers agreed Monday it was time to sanction Lukashenko himself, explained the EU's foreign policy chief Josep Borrell.  "We saw a strong and disproportionate response to the demonstrators again. There has not been any signal from the Belarus authorities to engage in any kind of conversation, in any kind of talks - they have not accepted the OSCE mission," the top diplomat told reporters.
"I had the opportunity to talk about it with the Minister of Foreign Affairs of Belarus. A set of countries has proposed a new set of names, among them [Aleksandr] Lukashenko himself, and all members [of the Foreign Affairs Council] accepted this proposal..." he added.
Borrell clarified that to avoid sanctions, he and other officials should enter into talks with the opposition and end a crackdown on protesters.
This month, EU leaders already imposed sanctions such as travel bans and asset freezes on 40 officials in Belarus. The 27-nation bloc believes they are responsible for violence against peaceful demonstrators, opposition members, and reporters.
Those on the sanctions list are also accused of "misconduct" during the recent presidential election.