At Least 94 persons have died in Kyrgyzstan-Tajikistan clashes 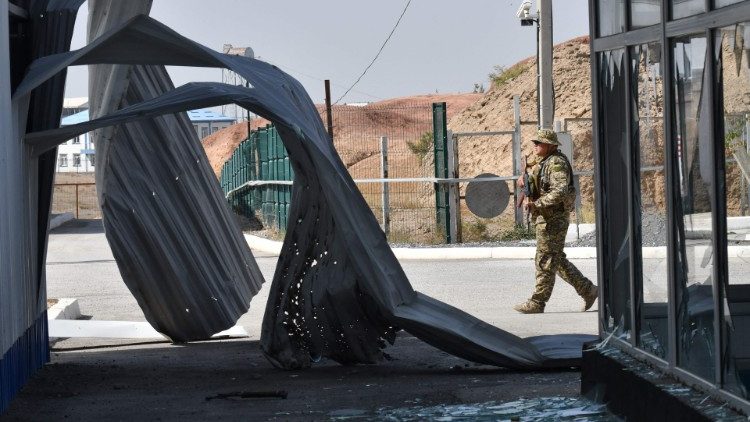 Authorities say at least 94 people have died and more than 100 injured in clashes on the Kyrgyzstan-Tajikistan border – the deadliest in years. The battles come as regional power Russia focuses on its invasion of Ukraine.

Footage has emerged of combat troops in a military plane. Kyrgyzstan's President Sadyr Japarov urged his nation on Monday to trust its army and strategic partners following massive border clashes with neighboring Tajikistan.

He said there was no need for volunteer forces at the border with Tajikistan, but concerns remain that the fighting will escalate into a full-scale war.

Violence regularly erupts between the two former Soviet republics, whose border has been contested since the collapse of the Russia- led Soviet Union in the early 1990s.

But with at least nearly 100 killed in recent days, the clashes between these mainly Muslim nations were the deadliest in recent memory.

Late on Sunday, Kyrgyzstan reported more than a dozen deaths taking its total death toll to at least nearly 60. It added that more than 100 people had been injured and declared Monday a day of mourning for the victims.

Kyrgyz Security Council Secretary Marat Imankulov said, "there was a shootout all day at the border between Kyrgyzstan and Tajikistan."

He added: "We believe that this is a provocation. The armed forces, border guards, and other service members of Tajikistan carried out the shooting. Our border guards acted adequately; they also fought back in response."

More than 30 people are also believed to have died in Tajikistan recently.

The latest fighting involved using tanks, aviation, and rocket artillery on a disputed section of the border in Kyrgyzstan's Batken province.

Both sides blame each other for the outbreak of violence. Tajikistan and Kyrgyzstan share a 1,000-km (600-mile) border, a third disputed.

With violence continuing, many were displaced by the fighting: Kyrgyzstan said some 137,000 people had been evacuated from the conflict area.

Kyrgyz media claimed that some people had already started returning to their homes, but it wasn't clear for how long they would be able to stay there.

Russia's President Vladimir Putin called for a de-escalation of tensions in phone calls with Tajik President Emomali Rakhmon and Kyrgyz President Sadyr Japarov on Sunday. But with Russia focused on its invasion of Ukraine, there is international concern that tensions will rise across the Central Asian and Caucasus regions of the former Soviet Union.