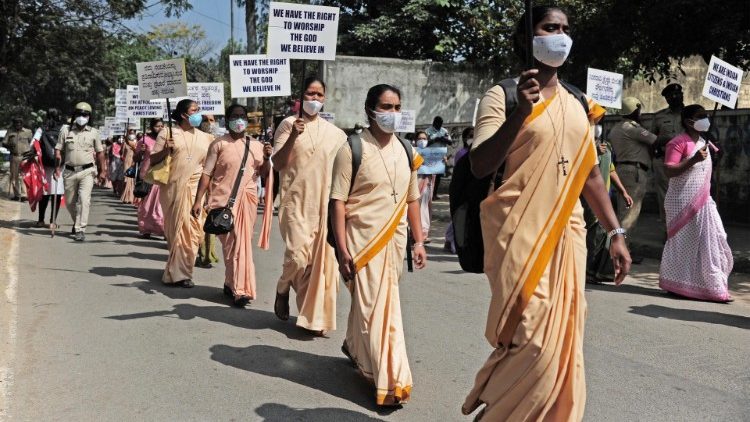 Karnataka state’s Legislative Council passes the controversial “Right to Freedom of Religion Bill” which criminalizes religious conversions, amid concerns of Christians and other religious minorities for religious freedom.

Despite fierce opposition from Christians and opposition parties, a new controversial law cracking down on allegedly “illegal” religious conversions in Karnataka passed its final hurdle last week, when it was approved by the upper house of the local parliament, making Karnataka the tenth Indian state with anti-conversion laws.

The “Protection of Right to Freedom of Religion Bill 2021” was introduced last year by the local leading pro-Hindu Bharatiya Janata Party (BJP). It had already been approved by the state Legislative Assembly in December, but at the time didn’t have enough support from the Legislative Council, whose final sanction is necessary for any law to go into effect.

However, the measure was enforced in May this year by an ordinance signed by the local governor, Thawar Chand Gehlot, a senior member of Bjp, a move challenged as unconstutional by the opposition and the Church.  On September 15  the ruling nationalist party managed to muster enough votes in the upper house of the state to go ahead with the legislation.

The new law prescribes imprisonment of three to five years along with heavy fines in case of conversion due to “force, undue influence, coercion, allurement or by any fraudulent means” or “by a promise of marriage.” According to to its provisions, any person who is a "victim" of attempts of "forced conversion," his or her relatives, or even an acquaintance, can file a complaint.

The offense is considered so serious that it does not allow for release on bail. Anyone wanting to change religion will have to file a declaration before designated government authorities at least 30 days in advance, citing the reasons for the decision.

Christians in Karnataka, who make up less than 2 percent  of the state population, are among the strongest opponents to the new legislation, which they say, leaves space for arbitrariness and, in fact, targets social and educational activities promoted by Christian communities.

Their concerns have been repeatedly voiced by  Archbishop Peter Machado of Bangalore, head of the Karnataka Bishops' Conference, who, before the signing of the ordinance in May, handed the Karnataka governor a memorandum listing the reasons for religious minorities' opposition to the legislation. He subsequently  challenged the ordinance in the state’s high court. Christians in Karnataka state say Hindu groups have been aggressively targeting them since the pro- Hindu Bharatiya Janata Party came to power in the state in 2018.

For his part, Home Minister Araga Jnanendra, who introduced the measure,  has dismissed these concerns by saying “there is freedom to convert but not under coercion or allurement”.

The first Indian State to adopt an anti-conversion law was Orissa back in 1968, followed by Madhya Pradesh in the same year and Arunachal Pradesh in 1978. But the number of states introducing these restrictive measures has increased significantly in the 2000s  with the rise of the  Hindu nationalist BJP  Modi, which has has become the country's dominant party and has ruled India uninterruptedly since 2014.

Laws criminalizing religious conversions have also been introduced in Chhattisgarh (2000), Gujarat (2003), Himachal Pradesh (2006), Jharkhand (2017), Uttarakhand (2018), and Uttar Pradesh (2020), amid growing intolerance against religious minorities, including Christians and Muslims ,who have been repeatedly  attacked under the pretext of illegally converting poor people from Hinduism.