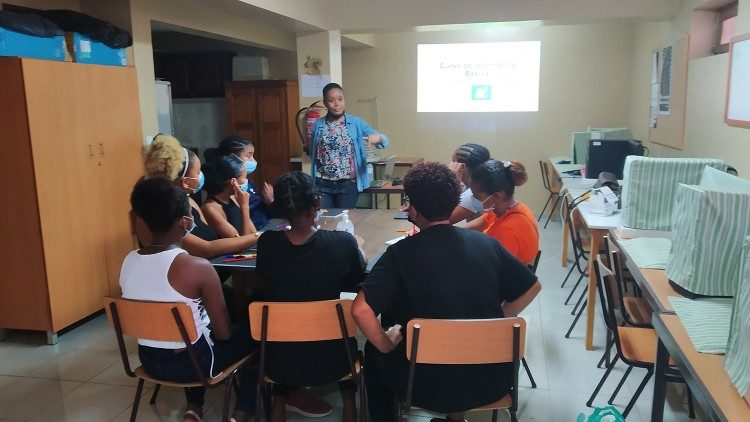 The story of how Chapter 3 of the Book of Exodus inspired three nuns to embark on a mission to free women trapped in prostitution, and how their work continues to liberate many women stuck in a web of exploitation in Cape Verde.

Liberating women from the chains of all forms of slavery, with special attention to the victims of prostitution and sex trafficking, is the mission carried out by the Congregation of the Sisters Adorers, Handmaids of the Blessed Sacrament and of Charity, founded in 1856 in Madrid by Micaela Desmaisieres,  Lopez Dicastillo Olmeda, who is venerated today as Saint Maria Micaela. After meeting a young victim of prostitution in the Saint John of God Hospital in Madrid, young Micaela, who was part of the Spanish nobility, gave up her social position to dedicate her life to others. In 1845 she opened her first home  welcoming exploited women. Following the charism of their Foundress, the Sisters Adorers are currently present in four continents with 170 projects in 25 countries. And from the small archipelago of Cape Verde too, says Sister Simona Perini, paraphrasing Exodus 3 in an interview with our newspaper, we heard the suffering cry of many women caught in the network of exploitation in order to survive. “How could we remain indifferent to this cry for help? This is why”, she explains, “13 years ago some sisters founded the Adorers community in Mindelo, a city in the Island of Sao Vicente”. Three religious women, Italian Sister Simona and two Spanish sisters, continue to be on the front lines, restoring dignity and redeeming women who are victims or at risk of prostitution, who “live in conditions of extreme poverty in shacks on the outskirts, usually built with metal recycled from shipping containers, without any light, water, gas or toilets. Many of them are single mothers, mistreated or abandoned by their partners, forced to prostitute themselves to support themselves and their families”.

Over the years, the small congregation has developed into a free and liberating presence for women in vulnerable conditions of the island. In 2016, they launched the social programme, “Kredita na bo”   (Believe in you” in the local Creole language) whose main purposes are liberation, personal advancement, social and work re-integration of the women, as well as denouncing situations of injustice. The programme, which has access to a team of Cape Verdian professionals, is made of several projects: listening centres, day centre services, psychological and social intervention with adolescents who risk exclusion and prostitution, and awareness raising. The listening centre “is a space dedicated to welcoming and to educational, psychological and legal support to women of all nationalities between the ages of 18 and 40 (with exceptions), who live in Sao Vicente or in other islands”, Sr Perini explains. The women have the opportunity to participate in formation courses (literacy, computers, cooking, sewing). Moreover, a food package is distributed each month to some families benefiting from the programme. This however, is a temporary assistance aimed at preventing them from ending up on welfare, she stressed.

This project, which currently involves 185 women, “arises also from the need to give concrete answers to an ever larger number of marginalized adolescents who run the risk of falling into the web of prostitution; in the space dedicated to them, they have the opportunity of gaining the abilities needed for a harmonious development: school support, group formation on values, psychological, education and legal support. Another important objective  is to raise awareness in Cape Verdean society regarding issues linked to trafficking and sexual exploitation, disseminating information on assistance to victims and promoting awareness on the importance of one’s own actions and omissions in this field, so as to make everyone responsible.

Despite being considered to have a middle human development index since 2007, Cape Verde has yet to deal with the drought and the scourge of unemployment, especially of the young and women. According to the UN Office for the Coordination of Humanitarian Affairs, 9.2% of the population lives in extreme poverty. “The absence of opportunities risks giving rise to alcohol abuse, use of psychoactive drugs, youth delinquency and begging. In recent years, prostitution fuelled by sexual tourism and the tragedy of child prostitution has also afflicted the archipelago”, Sr Perini says, adding that working in such delicate contexts involves daily challenges, “our greatest challenge today is to guarantee a safe place and to accompany, part of the way, the adolescents and more vulnerable women. Many girls are abused by godfathers and family members, others are at risk or they already work as prostitutes. In addition, there is a growing number of early pregnancies that forces many young mothers to accept oppression just to have a roof over their heads, for them and their baby”. The community has the intention of broadening its area of activity to other islands. “In particular, what matters to us is to establish homes that welcome victims of trafficking, prostitution, gender-based violence and vulnerable adolescents”.

Thanks to a major subsidy from Spain, “we are able to support with microcredits, the dream of many women who attend our cooking courses. Once training is complete also on the business side, each of them receives a kit. The cooked products are then sold as street food”. Julia’s story is symbolic, Sr Perini enthusiastically says, explaining that “she believed in herself”, becoming a seed of hope for many other women. “This young woman by word of mouth turned to our centre to ask for help years ago. Tested by a life spent in prostitution, she hoped to find other avenues to feed her numerous family and to leave the condition of degradation. Julia lived in a small tin house and she only had a small brazier in the courtyard with which to cook. Our staff suggested she attend the cooking course. Her desire for liberation and her need to entrust herself to someone who could support her were so strong that even before completing her course she began to sell products she had prepared herself. Today, with a dignified job, she has succeeded in finding better housing and reaching a standard of life that is more serene”. This story is the proof that together we can reverse course, taking a new path towards freedom.