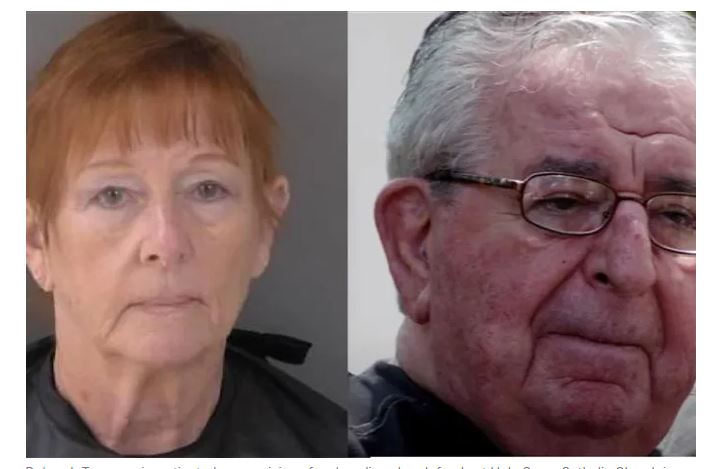 A priest along with the former parish administrator of a Catholic church in Florida embezzled nearly $1.5 million in parishioners’ donations into a secret bank account for personal use, Vero Beach police said Tuesday.

The former pastor of Holy Cross Catholic Church in Vero Beach, Father Richard “Dick” Murphy, died on March 22, 2020, at the age of 80. The administrator, 69-year-old Deborah True, “turned herself in” to the Indian River County Jail in Vero Beach on Sept. 19, police said in a statement posted on the Vero Beach Police Department’s Facebook page.

The Diocese of Palm Beach contacted the police department in December 2021, raising concerns about a fraudulent bank account and the misappropriation of church funds that took place over the course of five years.

After a nine-month investigation, police concluded that from 2015–2020, $1.5 million in parishioner donations was funneled into a bank account called “Holy Cross Catholic Church” that was opened by Murphy and True in 2012. The account was hidden from the Diocese of Palm Beach, police said.

Between 2015 and 2020, True paid off her personal debts with over $500,000 of the funds, police said. True transferred an additional $147,000 from the fake account into her checking account, police added.

According to the police statement, the late priest “personally benefited from the funds in the account.” It is unclear whether the entire $1.5 million in the fake account was spent. Police did not respond to a phone call inquiry on Thursday afternoon.

Police said that a criminal investigation has not been opened against Murphy because of his death. True “turned herself in at the Indian River County Jail on one count of Organized Fraud over $50,000,” and was released the same day on bond for $25,000, according to the police statement. According to veronews.com, True is scheduled for arraignment on Nov. 3 at 8:45 a.m.

“The Diocese of Palm Beach reported concerns to local law enforcement after discovering these irregularities and has fully cooperated throughout their investigation. The diocese understands that an arrest has been made of a former employee,” the statement said.

“The Diocese of Palm Beach is committed to financial accountability in all of its parishes and entities and will continue to cooperate in this process,” the statement said. “This matter does not involve the current pastor at Holy Cross Catholic Church in Vero Beach.”

According to Murphy’s obituary, True was his “longtime” secretary and his caregiver. Murphy was the pastor at Holy Cross for almost 23 years, from 1997 to 2020, True told veronews.com at the time of Murphy’s death.

True told the outlet that Murphy was a “fantastic leader” and that “he cared about the parishioners and they cared about him.”

“He believed we needed to reach out to people in the community whenever there was a need,” True said.

True added that “he really cared about Vero Beach” and said that “he was a private person who didn’t like accolades or awards. He did stuff from the heart.”

According to Murphy’s obituary, he was born in Wexford, Ireland, in 1939 and was ordained in Ireland. He then served as a priest in Miami and at various parishes in South Florida, including St. Elizabeth Catholic Church in Pompano Beach, Sacred Heart Catholic Church in Lake Worth, St. Brendan Catholic Church in Miami, and Sts. Peter and Paul in Miami.

Murphy served as the bishops’ delegate in the building and real estate development department for the diocese and as president of the affordable housing for seniors at Catholic Charities, the obituary said.

“He always relished being a pastoral priest,” the obituary said.