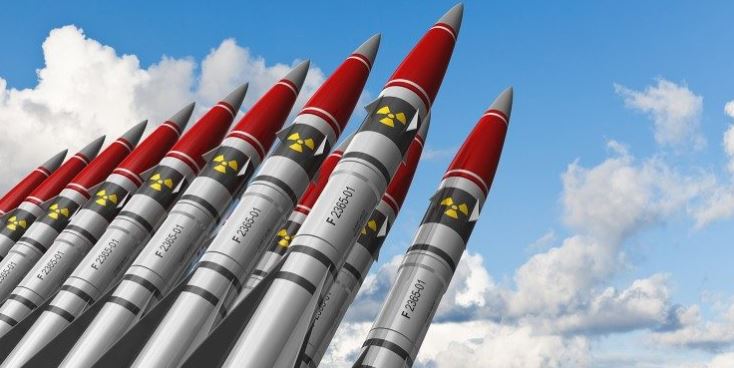 The UN Secretary General and anti-nuclear movements welcome the first-ever treaty to ban nuclear weapons, which enters into force Friday. The treaty was mentioned by Pope Francis at his weekly General Audience, as he urged all nations to work toward a world free of these deadly arms.
The first-ever Treaty on the Prohibition of Nuclear Weapons (TPNW) is now part of international law, coming into force on Friday after decades of negotiations.
It’s been hailed as an historic step to rid the world of these deadly arms - but not everyone is happy.
Countries known to possess nuclear weapons, including the United States, Russia, Britain, China, and France, have not signed up to the treaty.
Signing and ratification:
The treaty was adopted on 7 July 2017, and opened for signature on 20 September 2017.
On that same day, Archbishop Paul Richard Gallagher, the Vatican's Secretary for Relations with States, signed the Treaty at the United Nations Headquarters in New York.
The TPNW secured the 50 ratifications it needed to enter into force at the end of last October, and as of Thursday 61 countries had ratified it.
What it says
The treaty states that all ratifying countries will “never under any circumstances ... develop, test, produce, manufacture, otherwise acquire, possess or stockpile nuclear weapons or other nuclear explosive devices.”
It also bans any transfer or use of nuclear weapons or nuclear explosive devices — and the threat to use such weapons.
Nuclear Treaty welcomed:
In a statement, the UN Secretary General Antonio Guterres described the Treaty as “an important step towards a world free of nuclear weapons.”
Speaking to UN News, the Executive Secretary of the Comprehensive Nuclear-Test-Ban Treaty Organization, Lassina Zerbo, spoke of the "devastating" consequences of nuclear weapons and said they should never again be used.
“The message remains we cannot forget the devastating consequences of nuclear weapons use and testing, just as the atomic bomb survivors remind us that never again should nuclear weapons be used."
Beatrice Fihn, executive director of the International Campaign to Abolish Nuclear Weapons, said this Friday was “a really big day for international law, for the United Nations and for survivors of Hiroshima and Nagasaki.”
Pope Francis voiced his support for the Treaty at his Wednesday General Audience, and appealed for all nations to work toward a world without nuclear weapons.
The best way to do this, he said is by “contributing to the advancement of peace and multilateral cooperation, which humanity greatly needs.”